You heard he is a cultist. You could not believe it, you said “He is so young and He is just 16 and in SS1”. Now, you have seen him  marijuana parting his lips, a tattooed snake on his arm and in his hand is a bottle of beer. You heard him say that his favorite date is the 7th of July, and you assumed that was his birthday. You stood afar and criticized him, you told your friends that hell awaits him, you shook your head and said to
yourself, “He is already doomed”. But you do not know that within the “bad, hard guy” lies a fragile, aching heart wanting to be loved and showed a little care. Now, he only finds solace in his gang because his dad and mom are on the brink of divorce!

She knocked on your door asking to help you do anything for food or money. She looked so unkempt and malnourished. You were torn between pity and disbelief. You know her uncle to be a rich and religious man, an elder in his church, and you cant help but wonder why she would be in this sorry state. You concluded that she has been wayward and disrespectful and this is his way of punishing her for some time.  Without asking her any questions, you managed to give her a rumpled N100 note, sent her away and told her not to come back. She leaves, fighting tears, wondering how she would go back to her uncle who had sworn not to take care of her except she warms his bed!

That man you saw yesterday has been going through a hard time. He is a job-hunting father who just lost his only son and has been pondering on how to bury his dead. He bumped into you and before he could apologize, you have rained insults on him. You saw the tears well up in his eyes but you did not bother to show any empathy. To you, he is just a depressed fellow who should not bother others with his woes.

You saw her in a bar, stinking of alcohol. She kept laughing and muttering to herself,  “Why? Why?” You walked past her, even though a voice inside of you kept telling you to find out her problem. You shut the voice down and tagged her “A cheap drunk. A woman for that matter”! But that cheap drunk is a widow who had just been diagnosed with breast cancer, moreover, she just lost her job a month ago. Now, she thinks those bottles of alcohol could wash away her sorrow.

And you claim to have the light, you boast in the
scriptures because you know only the letters (but you are devoid of revelation)!

You failed to bring the “bad, hard guy” close and show him the truth and now he has fulfilled the request of his gang by raping his younger sister leaving his whole family distraught and confused;
Also, your N100 could not help that young girl for she finally yielded to the advances of her “rich and religious” uncle. Now, she has been deflowered, all hormones have been let loose. She has been selling her wares to all and sundry and she got pregnant. At present, her cold body is lying in a mortuary because of a failed D&C just because you refused to bring her close and show her the ideals of life. And you claim you have the light;

The depressed man you insulted was seen hanging from a mango tree recently. His suicide note read “I am too weak to carry on”. You could not show him any form of sympathy, perhaps, he might have shared his burden with you. Then you would have let him know that in his weakness, God’s strength is manifested. And you claim you have the light;

That “cheap drunk” is now on the hospital bed staring into the space in despair, waiting for
death to rap on the door. All she needs is a message of hope, a message that would give her life – the God kind of life.

You have the message. You are an exquisite perfume, do not bottle up your fragrance, SPREAD EVERYWHERE. You are the light, do not hide your shine. You are the salt of the world, let your taste be felt.

You would only pass this place once,let the world know you came in the name of Jesus.
–   Pastor Ebi@Fotizo Ministries

Have a prompt-to-do attitude concerning the gospel,God is counting on you to preach the world back to him….
Preach, Preacher….. Light,Shine.

This love, in me it burns,
Your song,in me is sung.

Oh Jesus,
When all things are battered,bruised and torn.
One thing remains,
Every note in our love song.

This love, in me it flows,
Your light makes me glow.

Oh Jesus,
I know when rest,upon my body,is laid.
One thing sure remains,
Your love that never takes a break.

This love, heaven in my heart,
Your word, light to my path.

My Jesus,
Your voice soothes me,
The love in every sound
Is what makes my world go round.

Prophecy is in part,
and friends may shyly depart,
One thing remains,
Your love is here to stay.

I’ll tell a broken world that Jesus saves,
I’ll tell an abandoned folk that Jesus stays.
To the bruised and to the lost,
I will tell them you are the only way.

My lord Jesus,
One thing remains,
You, I, Ours ! 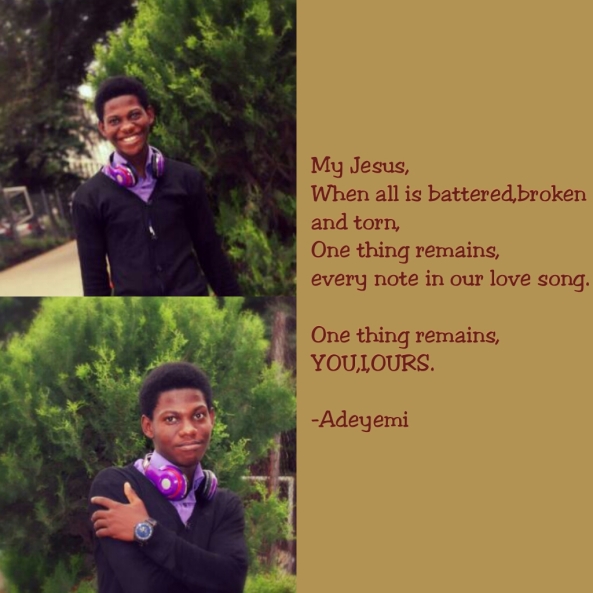 Everywhere and everyone is busy, I so love the positive energy I see all around me.
I wish you a merry Christmas, I want to share what God told me. #BlogIt

So many lessons from the Christmas story,and we must learn to learn.

This shows us the kind of life we have in him, we are birthed of miracles. Our everyday life is meant to be supernatural, we are not limited by the principles and laws that rule this world. No, we are of God. They say ” that’s the way it happens to everyone”, you tell them YOU ARE DIFFERENT, scripture calls you a Peculiar person(1 Peter 2:9)

[Tweet : We have a Model in Christ, He has shown us how to live from start to finish : supernatural]

This Christmas season should help us reflect on the virgin birth,the faith life and amazing thoughts and works of the lord.

Jesus didn’t come to pass away a part of eternity, He came to fulfill prophecy, He came because of the habitable parts of the earth. He came for the lost.

God was so keen on evangelism that He started it himself by leading those 3 men to where Christ was laid.

[Tweet : We have a mandate, an instruction and an assignment; to tell the lost world that JESUS SAVES]

This Christmas is another time to buckle our belts, we would do what he would have us do: MAKING DISCIPLES OF NATION.

NO SOUL IS WORTH PERISHING.

We know who we are,
We are one with the father.
What makes him smile makes us smile.
We would turn the world from all lies.

Have a merry Christmas celebration.
Enjoy.

Let’s take time to meditate on the lyrics of this song, this song blessed me. I strongly believe it would bless you too.